And I just keep going.

Some stuff is happening.

I've counted three different groups of deer that roam around--one group of six, one of three, and one of two. They wander and nibble, wander and nibble. This one is right by our driveway. They are good around Tim and I, but don't like the dogs much. 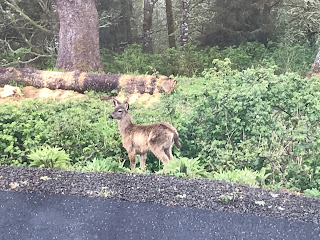 Little Needle
This is a Cozy blue pattern that I'm doing on blue cloth. What you see is the pattern on that sticky  dissolvable paper. Once I finish the pattern, then I soak off the paper and then the design will be on dark blue fabric. 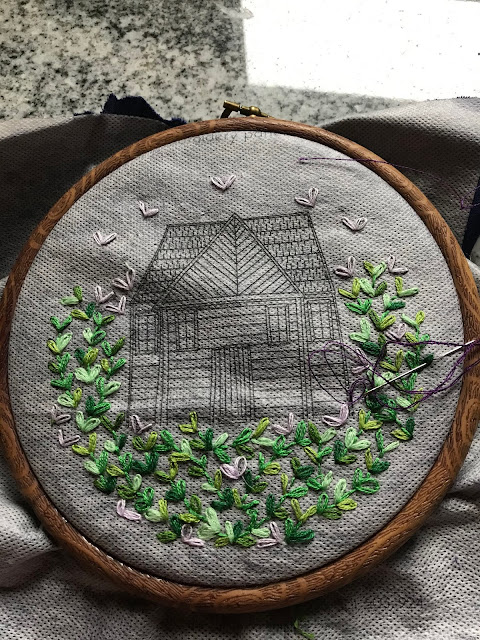 Yoga
I keep doing it.

Reading
I'm working on a few books. "My Dark Vanessa" is--kind of a retelling of Lolita? It is well written and pretty absorbing. I'm also reading about the making of Chinatown (the film) called "The Big Goodbye" by Sam Wasson. I also plan to start "I Am Not Your Perfect Mexican Daughter" soon.

I finished "Club King" by Peter Gatien, a memoir of the man who started a bunch of nightclubs in the 80s like The Limelight. It was actually kind of interesting. I went to a party at the Limelight in Chicago once (maybe twice?) but I was never really a 'club' person. It is kind of interesting (as I already said) and he got hounded (and deported) by Rudy Giuliani, I had no idea about that.

Your stitching is so pretty. When you soak the paper, the colors from the floss don't run? Around here deer are so accustomed to people that they really are not frightened at all. Sometimes it is disconcerting.

Love your stitch project. I haven’t heard of the paper. What is it called?

Nice work on the embroidery!

Your deer's coat is to thick and pretty. Ours are not like that here!