We bopped over to Eugene this weekend to work, leaving Saturday morning and coming back Sunday night. We took all the animals, and they are such troopers, being so patient with the drive and for being in a different place. This was the first time the animals and I had been back to Eugene in over five weeks. We missed the tulips, but I was excited to find the wisteria in bloom. 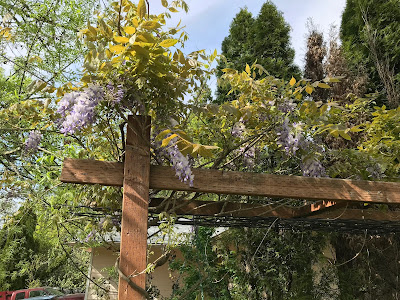 And in addition to the wisteria, there were weeds weeds weeds everywhere. Tim has weeded when he was at the house 2.5 weeks ago but I guess there was rain, sun and warm weather, and the weeds were ridiculous. So we spent Saturday afternoon gardening--Tim worked on the weeks in the back yard, I did the patio and the front garden boxes (closest to the street). We had a pile in the back of the RAV 4 to go to the dump, and Tim took a second pile in on Sunday. We didn't even get to the part of the garden closest to the house, but luckily we have a yard guy coming by to work on that on Saturday.

Sunday was shearing day! I went to help shear the alpacas and Tim did more lawn work, including trimming branches and getting rid of wood.

Usually for shearing day Ann (who runs the farm) has about 30 people helping--her two (grown) kids come (her son from SF and her daughter from Seattle) and they bring friends and family members and it is a big work day and party. Well, none of the family could travel, and in addition Ann and Mike's house is getting 'jacked up' on Tuesday and so there's really no place to stay (Ann and Mike are doing a big renovation on their 100+ year old farm house). So the shearing crew was really small this year: me, Ann and Mike, Terry and Paul (who own an alpaca at the farm), Elissa (who owns a sheep farm nearby), Ann's son Paul (who drove up from SF alone) and then the two guys who do the actual shearing.

One guy--Steve--does all the shearing and the grinding down of teeth. His assistant (I never got his name) and Paul (Ann's son, we'll call him Paul 1) lifted up the alpacas and put them on their sides, then (and there is no way to put this delicately) trussed them up so they were stretched out. Then Steve did shears them, his assistant held their heads (to make sure they didn't flail around) and Paul gave then shots and cut their nails. The whole process takes less than ten minutes per animals.

What did the rest of us do? Well, I had the job of grabbing each alpaca, putting a halter on them, and then leading them to the scale (the shots they get are based on weight). Then I handed them over to Terry who took them to the 'waiting area' before they got sheared (there are two shearing stations). As soon as one alpaca is sheared, they get up and then I shooed them outside (which involves opening and closing barn doors).

Elissa made sure all the fleeces were in separate bags and labeled, and also kept track of what 'maintenance' each alpaca had (the dosage of shots, and whether teeth were done or not).  Paul 2 did all the vacuuming, and Mike held down wiggling alpacas. Ann was running around answering a million questions. We all got our jobs down pretty quickly, and we got all the herd (24? I think?) done in less than six hours.

Here's my guy Calypso, after shearing: 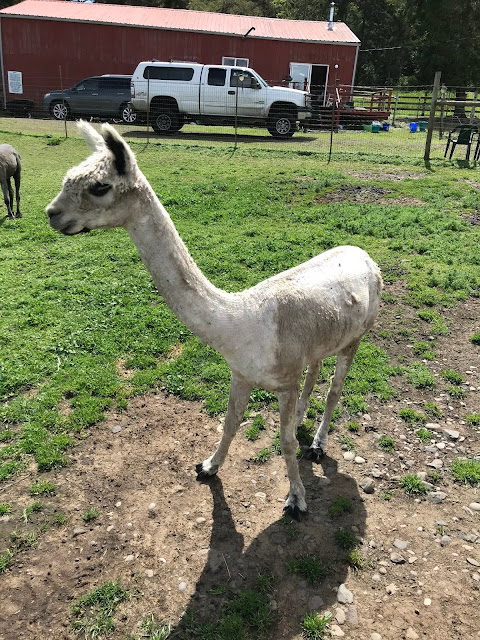 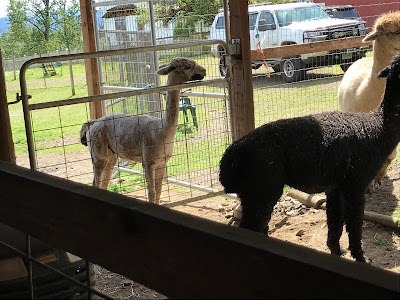 This is little Chaco, who had his first shearing: 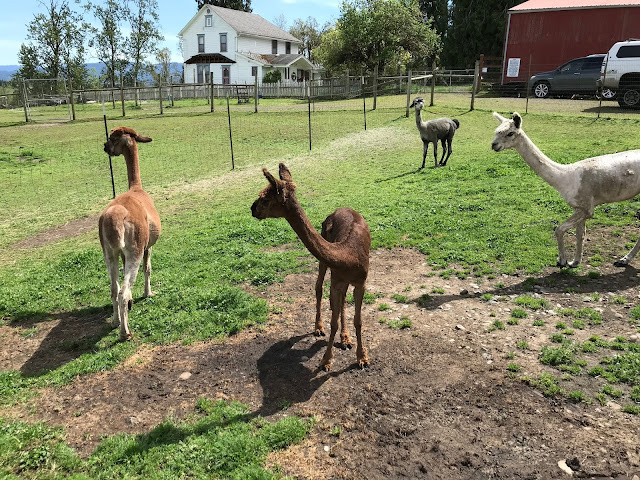 Ann gives some love to someone. I'm not sure who! 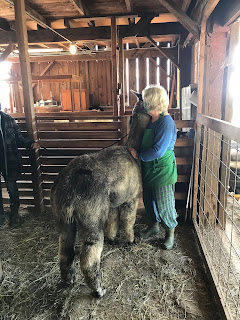 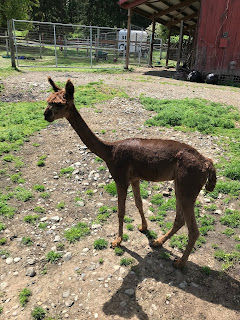 A bunch of boys before shearing. We had to herd them into this pen, then I had to herd them to a second pen, where I haltered them. The biggest ones weight over 200 pounds so that's a lot of alpaca to hold on to! They don't like being haltered, so I basically had to catch the, hold onto their neck while holding them still with my torso, and then wrangle a halter on.

There may have been spitting. And Calypso gave me a little kick--he is now reaching sexual maturity so he is feeling his oats! 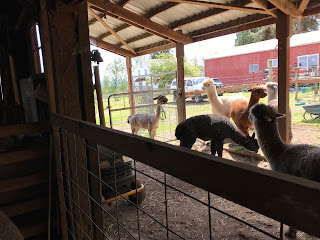 This is a big group of boys after shearing. They clearly wanted nothing more to do with me. 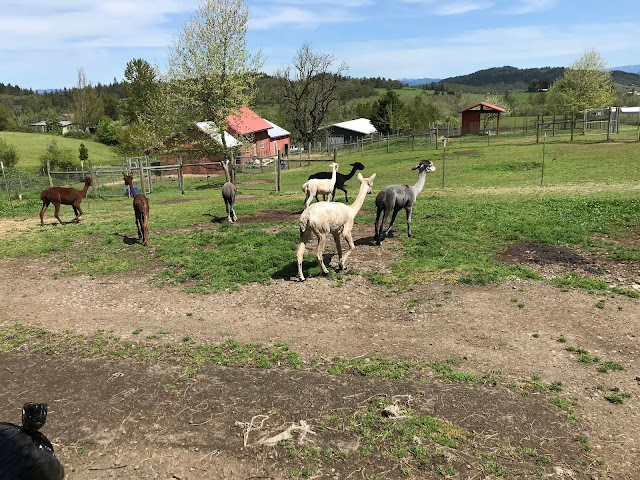 I spent some quality time with Atom, who was not happy about getting sheared and hid in the weighing shoot. 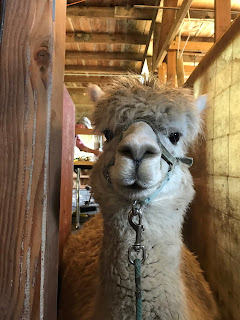 Here is the backside of Calypso (you can see his 'spots') and Atom behind him. 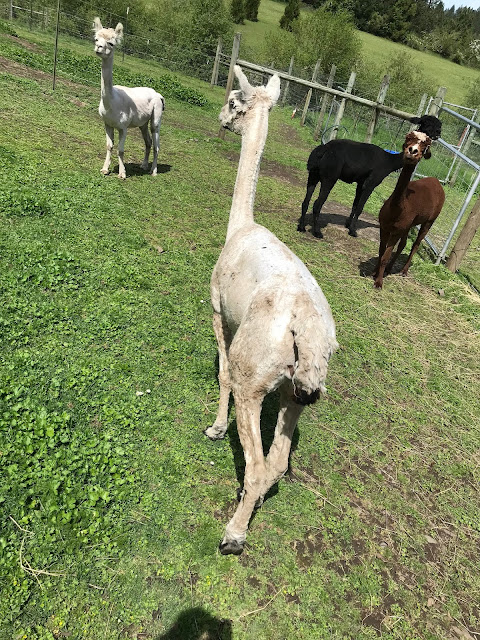 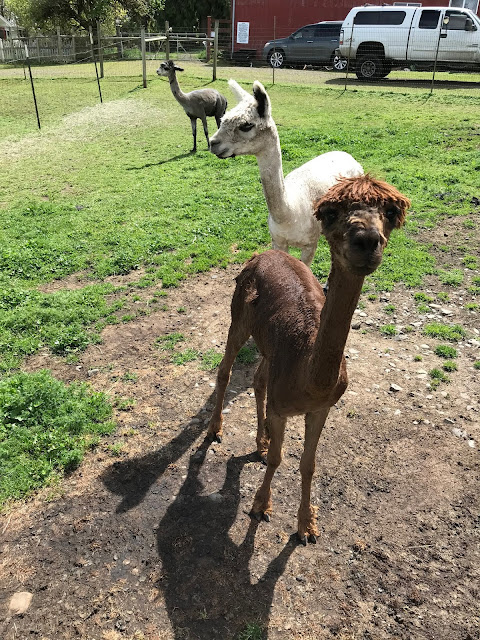 Me and Black Lace. We all wore masks and did our best at keeping 6 feet apart. 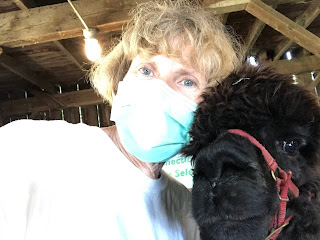 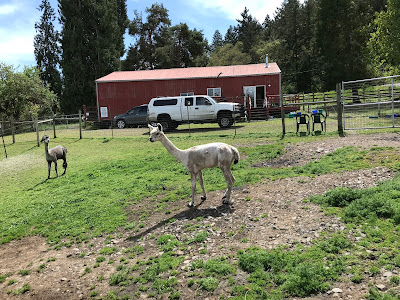 A bunch of skinny girls. We can definitely tell that Tink is pregnant. Her due date is 6/5. She is on the far right. 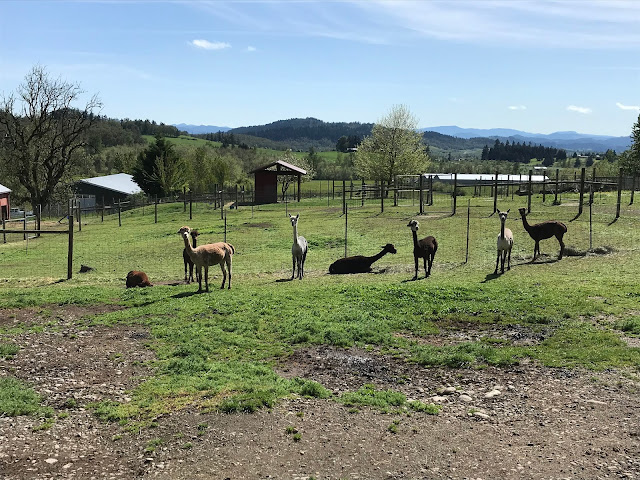 I should have a few more somewhere on my camera!

Oh my goodness! They look so bald - lol. That sounds like a lot of work! And grinding teeth? Did I read that correctly?

Our wisteria only has a few tiny spots that have opened. Lots of long buds, but all are still pretty tight. Of course, our cool (40's) grey days aren't helping....

how wonderful to spend time with the herd!!! Bill and I spent a day helping a friend do just those chores to get her herd sheared! We wore masks because of the dust-no corona then!

Calypso!!! What a busy day you had ! Im so glad Tink is doing well! I can't wait.

And charco is so so cute.

This post made me so happy Kim. I know it was a lot of work after a long weekend

What a wonderful way to get OUT and back to something that might feel close to "normal" for a day! (And, actually the weeding feels pretty "normal," too. . . ) Thanks for sharing your delightful time at the farm. XO

CLEARLY wanted nothing to do with you. :p

What a great post! I loved seeing all the alpacas. :)