Last week, the president of the UO came out and said 'we'll be back as a residential university in the fall'.  Then of course came a bunch of caveats, but no matter, the message went out that We. Are. Back.

Not so much. At most, I will have one in-person class a week, held in a room that is designed to hold three times the number. Most classes over 40 people will be online. And that will happen if we have testing, contact tracing, and a non-stressed system, none of which are guaranteed.

So it looks like we'll be living here through the end of 2020, with me going in once a week to do the class thing. That is really fine with me. It just seems so weird that we came out here initially for spring break, then for a month, then through the summer, and now through the end of the year. It's just weird.

I did get an email that my dentist is planning to reopen on Monday, with lots of stuff in place for safety. I have a cleaning scheduled on June 9 which I would imagine I'll try to keep, as long as things seem to be OK.  There should be a new cria by then (knock wood) so it might be a good time to spend a few days in Eugene.

I finished (finally) the local yarn store shawl and also did the weaving in on Circus Movement. I blocked them both and dried them first in the sauna, and now they're out on the deck.

Circus movement on the deck: 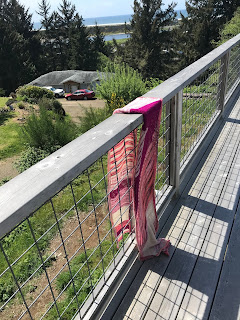 Local Yarn store in the sauna: 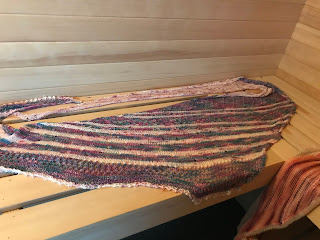 Hope your weekend is fine!

I think the sauna blocking is very clever! Welcome to your new home....

It's going to be interesting to see how things . . . open and function, that's for sure! I wonder when my dentist will open back up??? (My teeth cleaning was scheduled for late March. Canceled, of course.) Tom is headed up to our cabin to open it up today. Although I'm not sure when I'll be heading up myself, I'm sure we'll be spending a lot more time up there than usual this summer. XO

Everyday, I worry that the temporary crown I got in late February will last until the dental office is open. So far, so good.