It's Tiny Needle Tuesday! And I have tiny  needlework to show you! 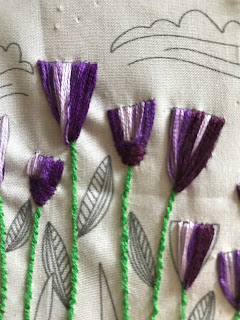 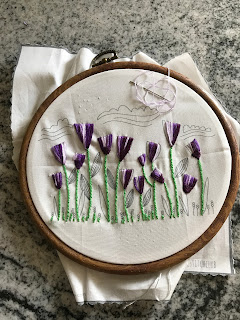 This is the June kit from Cozy Blue Handmade and I love it!
I forgot to mention yesterday that we watched two good things over the weekend. The first was Dolemite is My Name, on Netflix, which is a story about a real person, Rudy Rae Moore, who starred in a lot of Blaxploitation films. I knew nothing about him, but I certainly lived through this time period, and it was really interesting and pretty funny. It's also very, very raunchy. Very raunchy.
The second was "Quiz" which is streaming on AMC--it is three short episode (45 minutes each I guess) and it is really good--about a scandal about "Who Wants to Be a Millionaire" in the UK. It has a ton of recognizable actors (if you watch any Brit TV at all) including Matthew MacFayden, Michael Sheen, Mark Bonnar (from Shetland), and Helen McCrory (she and Michael Sheen were in "The Queen" and it was directed by Stephen Frears who also did the Queen).
Happy TNT!

We loved Dolemite Is My Name! (We saw as part of our Oscar watch frenzy last winter.) I LOVED the costumes! Your stitching is so sweet. Perfect for summer.

I THINK it was Kat's blog that mentioned a big stitching effort . Like a huge football field size mix of peoples stitching. I have a cross stitch I gave my father years ago I'm going to send:
As Years Go BY Dad ALwyas Recall You're as Needed Today As When I was Small.

The thing is he and I were NOT close . .We were not close at all. But I knew he wanted something that confirmed his needs to feel like the father..all the time...
to be right all the time
to never let you be an adult

Later in life we reconciled. But I think He d like the stitching to be part of a BIG thing.