This might possibly be my first Stephen West pattern? I think I've always hesitated because of size (his patterns tend to be big) and they are often kind of bright and they look involved. But the Botanic Shawl caught my eye since I love the stripes and the colors. Turns out that the stripes are pretty much due to the amazingness of Zauberball Crazy (here is a link to all its colors). This pattern isn't hard but it does require a teeny tiny bit of attention at the start of each row. 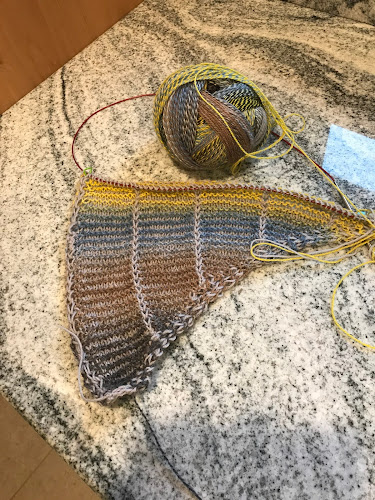 The color of this one is Sandhur, which is kind of hard to find but if you search around you'll find it--I got mine at Web's. The grey is some grey that was in the stash. I like this a lot, especially the technique on the sides which provides a really nice edge.
Paddle
We went for our first kayak of the season yesterday on the Big Nestucca river (it's not that big). The first paddle is always a bit rough because we're not used to lifting the kayaks onto the car, finding all the stuff we need, wondering if we remember how to do it----and it was all fine. We paddled up river against the tide (it's a tidal river, which is always a bit of a logistics challenge) and then paddled back with the tide so we had the easy part at the end.
It was quite a day for beasts of the air. We paddled by a little sandbar and got upclose and personal with five pelicans. I probably got within 10 or 12 feet of one. I love pelicans. We also saw two herons and two juvenile bald eagles--one was pretty much all 'adulted' color wise but the other still had its juvenile coloring. Plus lots of ducks and seagulls.
Movie
Last night we watched a movie on Amazon called "There are no facts" which was a documentary about forged artwork. It starts with one of the guys in Barenaked Ladies who bought a piece of artwork and someone told him it was a fake, and it leads into this very dark story of an art forgery ring run by a horrible person in Thunder Bay Canada. It is a bit uncomfortable story-wise but really interesting.
Reading
I finished 'Saint X' and the end was a bit of a slog, but overall the book was good. I also read Kevin Kwan's 'Sex and Vanity' which started kind of slow but ended up great.
Now I'm reading 'Girls of Summer' by Nancy Thayer (she writes kind of gentle 'women's fiction' set on Nantucket) and "Members Only" by Sameer Pandya which so far is really good---an Indian man is on the membership committee of his private tennis club, and while interviewing a Black couple makes a racist joke. The repercussions of this echo out throughout his life. It's good.
Today
I'm not sure what's up today--we'll see! Hope your Sunday is great!
on July 12, 2020

There are so many Stephen West patterns I've been tempted to "try," but I never have. I should just choose one and do it! Yours is looking great!

Oh my goodness! I love the colors you've chosen for that shawl. Beautifully muted and understated. Just gorgeous!

Beautiful shawl--I loved the edge of the one I knit with an I-Cord edge--like you say looks great but don't drop a stitch! It must've been the day for seeing young bald eagles! Quite the sight!

Great Kayak news. Is the Z-ball spliltty? I LOVE it, but for some reason I think I failed with it once.......
maybe there are different types. I just saw MKD was selling some of their Z stock.

I have no doubt you will master the West pattern. You are a great knitter!