I'm not sure why I have so many photos today!  It's been a lovely few days with nice weather--yesterday afternoon I drove up North to Manzanita to see my Eugene friend Lauren who has a house in Manzanita. It's less than 60 miles but it is all on 101, a two lane road that goes up and down the entire West Coast and so is a pretty major thoroughfair. It also goes through lots of little vacation towns and can I tell you? Vacations are clearly happening on the Oregon Coast. It took almost an hour and a half to drive up because of all the traffic in the little touristy towns. Coming home, I left Lauren's at 5:30 and it only took about 70 minutes because I guess everyone was having dinner or whatever. But it was fun to see her and her charming cottage and to actually get out into the real world for a bit (although certainly the Oregon coast isn't very 'real').
Yesterday was Calypso's birthday--three years old! I didn't get to spend it with him but I'm sure Ann showered him with love. This was taken last time I was there. 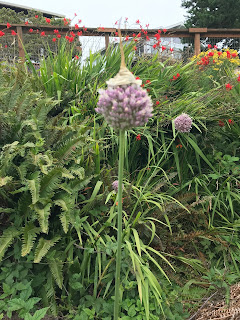 This one is across the street from our neighbors' at Terry and George's house. I love the color. I don't think they're thistles but if they are thistles they are kinder gentler thistles than wild ones. 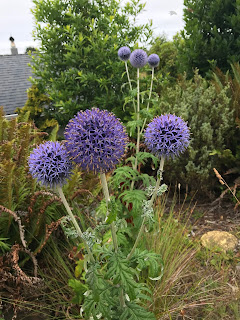 Here's the Stephen West shawl I'm doing with Zauberball Crazy.  It's the Botanic Shawl and I like this one a lot. The last time I was in Eugene I was digging through the stash and found a ball of Crazy in blacks and whites---I want to make something with beads. Red beads. 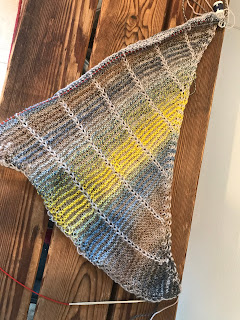 I've been doing some Iris Folding Christmas cards. This one is a Santa Head ornament that is missing its eyeballs. They will come (I plan to have a major Heat Embossing session at some point). If you look carefully, you can see that the white part of the card is embossed already. 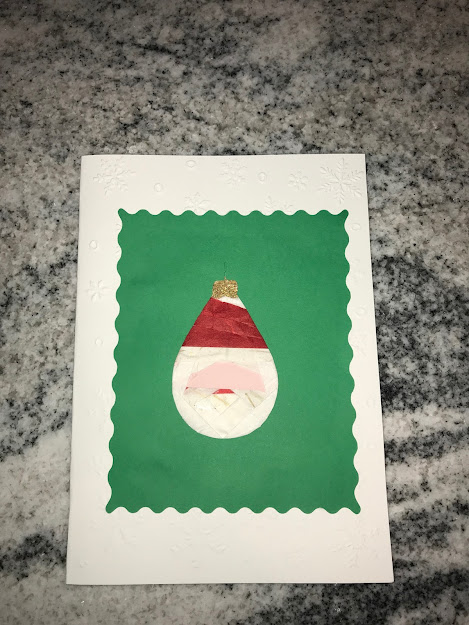 And while I'm moving away from the type of cards where I just take someone else's pattern and cut it out, I have been using up my sparkly vinyl by using it as card backing. This reindeer has black sparkly vinyl as a background and while it doesn't scream "HO HO HO" it is kind of elegant, I think. 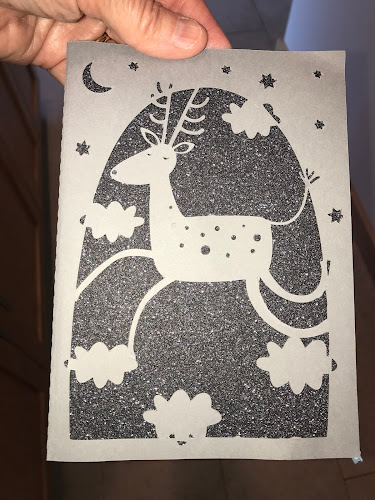 AND I have a new desk! We have a desk nook that has been desk-less for almost two years. While I've always 'worked' when we're out, I've generally worked at the dining room table and Zoomed in my workroom. I found this desk on Amazon and it fits nicely in the desk nook and the light is good (there's a great overhead light in the nook, so my Zooms should be well lit. And I can also get a small lamp if I need to). It's really basic so it won't get messy, but I like how the legs look. 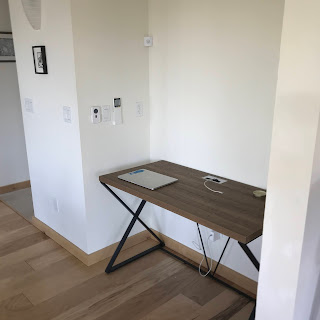 We are watching "Mystery Road" which is an old series on BritBox with Judy Davis is magnificent!
That's all from here!
on July 30, 2020

The desk and the nook and the legs and everything looks wonderful! I love a desk.

The cards are lovely, duh.

The Bomber giving the "Whaddid you get me for my birthday?" grin. . .

The shawl is really pretty! Great find for the nook desk-what an inviting space now!