I think this is the week I fall behind!

On the Sharon Show, that is.

I've done the first 'new' clue and am partway through the second clue and I am missing working on my other projects. I'm not a big 'joiner'--I belong to the Rav group but I'm not following along with anything so not 'keeping up' is potentially distressing only to me and THAT MY FRIENDS IS THE REASON WHY I SHOULD NOT DO KALs! 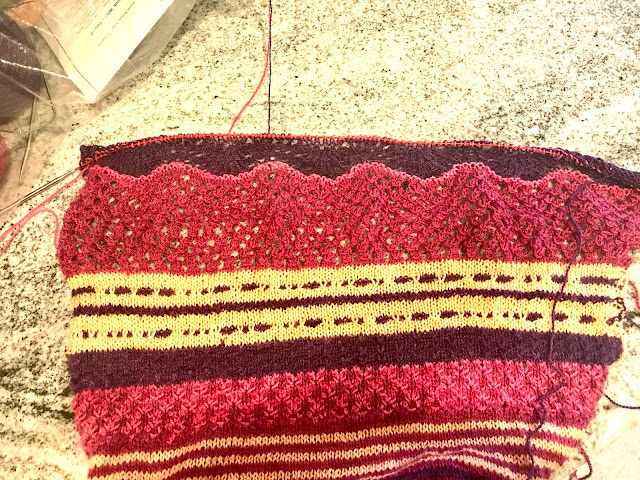 We had a bit of fog this morning. 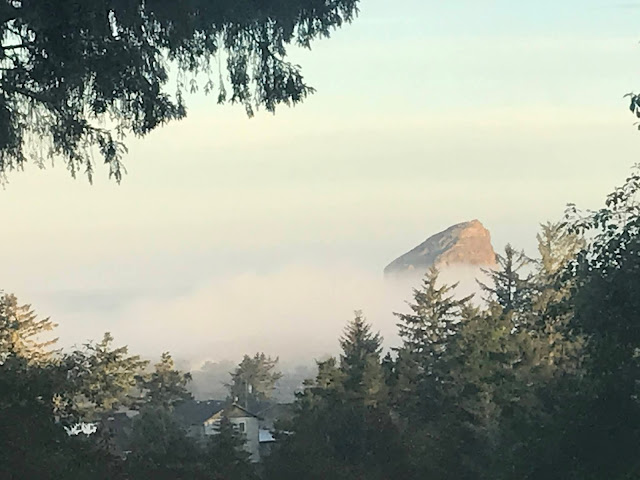 Yesterday was kind of lazy--I went to the farmer's market to get veggies for the week, we took the dogs for a good walk, and then I kind of hung out for most of the day. Tim's kayak has a little leak so he spent much of yesterday fixing that. And he made homemade pot stickers for dinner which were great.

I forgot to tell you all---as you may recall, we only have a tiny grocery here--the closest 'big' store is the Safeway that is half an hour away. The Safeway is fine, but  it makes me tense to go there.  The little store is just sort of blah--while the only things we *really* need to buy 'in person' are dairy, oj, meats, and vegetables (which is basically---food)-- our little store has good dairy while the meats and the veggies are generally sub par. We live in Tillamook County, so there's generally good milk and stuff.

So the farmer's market will tide us over til the summer tourist season is over (and I'll be much more happy about going to the Safeway). We also set up a subscription box called Butcher Box which is a box of meat. We easily have enough meat for 3 or four weeks of meals from one box. It's not inexpensive (we got the $150 box, which gives us several pounds each of ground beef, chicken breasts, salmon, flat iron steak, bacon and ground pork) and you can mix up the meat with every order. I had to rearrange the freezer a bit to get it all in there but I'm very happy about that.

And finally, some neighbors told us about the Tillamook Feed Store in Cloverdale, about four miles from here, which sells Feed (which we don't need) but milk, sour cream, eggs, all kinds of Tillamook cheese, and all kinds of Tillamook ice cream. I may have overbought on the ice cream sandwiches. A friendly guy runs it and so I now can almost avoid the little store in town. Except for OJ. But I can stock up.

Hope your Monday is off to a good start!

Just picked up my online grocery order. It’s not ideal, but it’s working. I refuse to actually go into a store or restaurant right now. The University students have returned; COVID cases are increasing daily, yet the majority of people are acting like life is normal. I don’t anticipate “normal” will return until sometime next year.

Okay. I can't remember anything you posted here except . . . ice cream sandwiches. (I want one so bad!)
XO

I love your photos of the rock. They are always alive in different ways.

I think I have only kept up on one MKAL I did for a shawl! It doesn't always inspire me when I get behind! Sorry. The shawl does look nice and colorful! Love the view of the Rock! The fresh cheese sounds good!