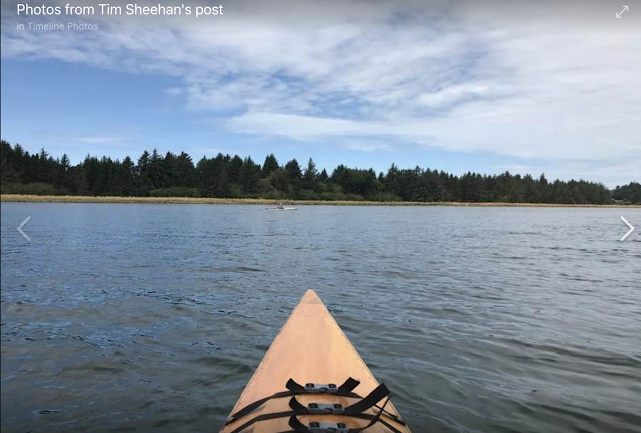 Tim took this picture--the nose of his kayak is pointing at me. We went out on the bay, and were out almost two hours. It was a bit windy when we were paddling out--we were going against the tide and the wind was was coming at us, so it was a bit of a push. Coming back, it was very easy as we were with the tide with the wind at our backs. Good timing on our part! We saw several herons and cormorants.
There was knitting. 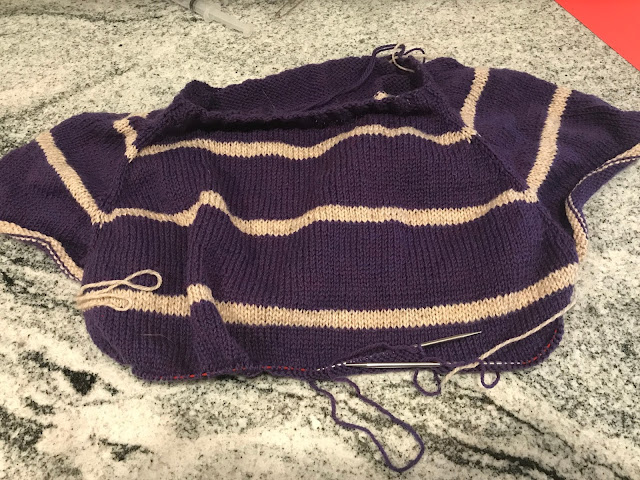 This is that mindless sweater that I'm working on. The sleeves have been separated from the body and I have a little over 11 inches of the body. So this is getting there.
There were cards. 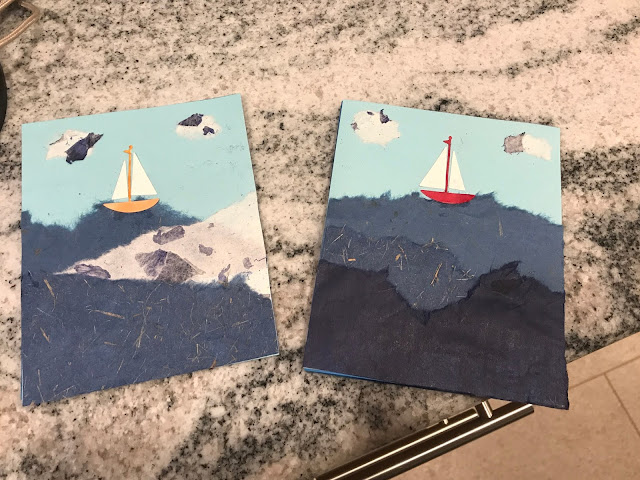 Mixed media cards---cardstock, mulberry paper, copic inks on sailboat, and embossing inside (the happy birthday message).
There was reading.
I read two books--"The New Girl" by Harriet Walker and "Nothing Can Hurt You" by Nicola Goldberg. I'm a big fan of psychological suspense books, and both of these fell into that category. "The New Girl" was good--it's a bit of a riff on "All About Eve" with a few good twists in it. "Nothing Can Hurt You" was an odd book--each chapter was from a different character's perspective and it just didn't make any sense. And then it just ended. The best thing about it was that it was short.
There was viewing.
We watched an 'older' series on Amazon called "Mystery Road" with Judy Davis. It was really, really good. Plus I love Judy Davis. We also watched a movie called "Bad Education" which was framed as a satire but it wasn't. It was an interesting story about corruption at a school district with Hugh Jackman and Alison Janney, but it wasn't a satire. It was OK.
There was cooking.

I made blueberry banana bread and chocolate chip cookies. Tim made croissants. I made Massaman Curry for dinner yesterday (yum).
There was a good weekend. Beautiful weather, minimal winds, and avoidable crowds. How was yours'?
on August 03, 2020

A heavenly weekend all the way around!

You had a lovely weekend! Your husband makes croissants? That's amazing.
I meant to kayak this summer, but it's August and I haven't gone once. I really need the upper-body workout.
Love your cards!

Well you deserved that lovely weekend.
My included feeding clover to my neighbors goats. Also , watching baseball! Worrying about Beatles.
Weight loss..........hiding....
waiting on vet to call us after labs drawn friday

What a lovely weekend you had! And home baked goods - perfect!!!

Nice time for your weekend...love the card and the knitting-I just separated the sleeves at the underarm and now have 14" of body to cruise through!

Sounds like a great weekend. I was hoping to learn to kayak this summer but the rental places are all closed.