Middle of the weekend

I guess since it is almost 6pm that isn't technically the middle of the weekend anymore. Oh well! Thanks for your comments and sympathy about the bite. It seems to be doing well, and that is a good thing!

Kathy B was surprised that they stitched my leg, and indeed the preferred way to treat a dog bite is not to stitch. I think it was a bit too jaggedy to feel it would mend itself easily. Two people at the Urgent Care place did say they prefer not to stitch.

I was also asked if our rock has a name. Before I answer that---we went to Sitka Sedge State Park (I tend to think of it as 'Sister Sledge') and walked on the beach and in the woods for over two hours. It was great. Here is our rock in the fog: 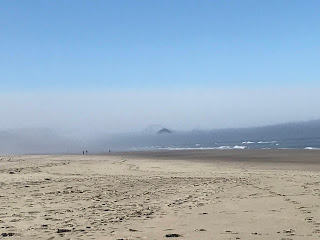 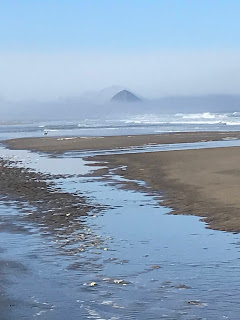 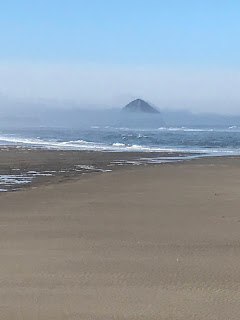 The rock has several names (Cindy asked me if it has a name). It is known as the "Haystack Rock" but this is kind of confusing because there is another, more famous Haystack Rock in Cannon Beach, about sixty miles or so North of here. The name of the rock is also known as Chief Kiawanda's Rock. The cape near the rock is called Cape Kiwanda.
We just call it The Rock.
I also am almost done with Clue 5! 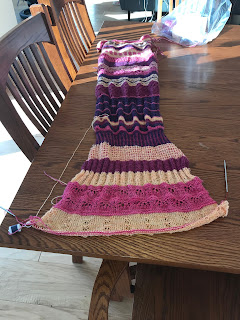 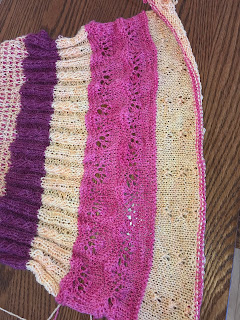 Tim has dinner ready so I'm off! Have a good Labor Day!

Thanks for the info on the Rock! The shawl is looking so good-it must be fun to add each of the stitch patterns.

The new sections of the shawl are lovely. The colors look amazing together. Have you seen Cindy’s drawing of your Rock?

That shawl pattern is really lovely, and your colors are working out so well.
There is so much beauty where you live! I love the Midwest, but we don't have oceans or mountains!
I hope your bite continues to heal well.

Glad to hear that your bite is healing up.

Your ROCK in the fog is simply beautiful.