The weekend went so fast. Saturday was off-and-on rainy but we got a good walk in, had carry out from the Oar House, and then I spent a bit of time reading and knitting.  The Ducks played football (the Pac-12 is back!) at 4:30 (they won against Stanford) and then we watched another episode of "The Last Dance". This morning we went for a long walk at the beach and then I talked to a former student for a while and did a bit of grading, followed by reading and knitting. Now we're settling in to watch Sunday Night Football and wrap up the weekend.

I'm making a quick trip to Eugene tomorrow---I have an open day and it isn't supposed to be raining. Not any appointments or anything but I haven't been to see the alpacas--or to see Ann's house remodel--for several weeks. I may pop into my office to empty out my mailbox.

The knitting continues to be the drop-stitched-shawl-where-stitches-have-yet-to-be-dropped and I think this is gong to wrap up relatively soon--it doesn't look like there's a lot of yarn left. 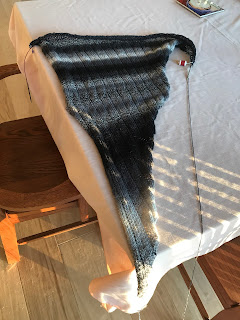 There are little red beads on this. 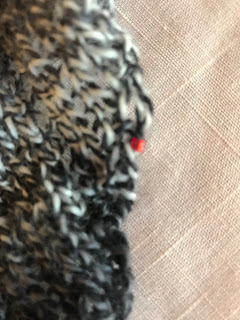 I also did another round of beads. The black flowered ones are from an envelope sent by Rifle Paper company. I just bought a pair of Keds on sale and the shoes came with an envelope holding the receipt that I used for the beads, as well as a shoe box in a pretty print that is clearly meant to be re-used--I'm using it to collect our tax stuff.

The orange and blue beads are from the Amazon catalogue! 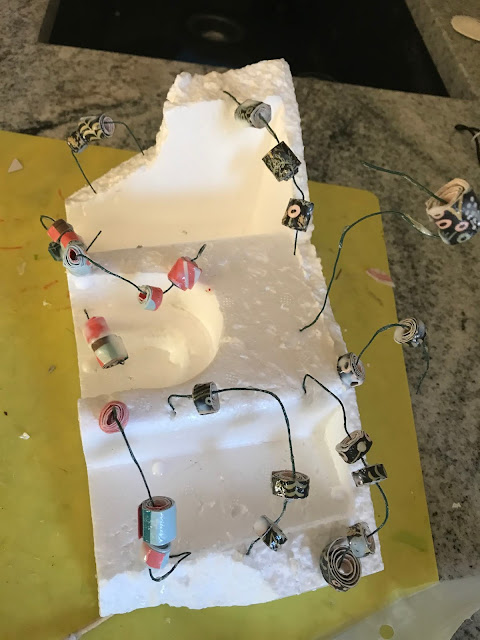 I hope your weekend was a happy one too.

Sounds like a relaxing weekend for you--a visit to the 'pacas will do you good!

When you're looking at papers, do you "see" beads? I mean, do you know right away what color(s) the beads are going to be?

Oh you get to see Calypso and new baby ! and Momma Tink.

I've been knitting and trying to catch up on a million little notes I've left myself.