It is very stormy here (which is kind of lovely)---the thunder and lightning started at 3am and I hurried Pilot the dog to his safe place (the car in the garage--he hates thunder and fireworks). The rain was off and on hard for the rest of the night. Friday evening we had a brief yet violent hail storm (the dogs were outside-I hurried them inside then!). We expect stormy weather today and then rain--forever, or at least until Spring.

I do have an FO--the dropped stitch shawl which finally has had the stitches dropped. Here it is before blocking: 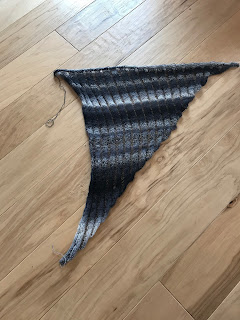 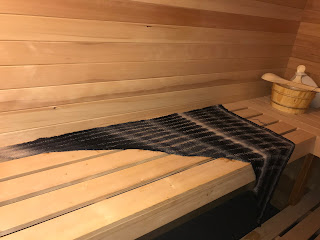 Let's see, what else? Busy with work, of course---three more weeks til a few weeks off for Christmas. Winter term (Jan-March) will be online, and I'm guessing at least the start of Spring term will be online as well.

We are watching a few good things on the telly--"Roadkill" on PBS (horrible title, but a great cast including one of my Twinnie's favorites, Hugh Laurie), "The Undoing" on HBO (we get it through Amazon Prime) that has Nicole Kidman (who must be a vampire, she doesn't age) and Hugh Grant, and "The Last Dance" about the Chicago Bulls (which is really interesting, even if you aren't a fan of basketball).

I'm currently reading "Anatomy of a Scandal" by Sarah Vaughn which I like. I'm trying to finish "Plain Bad Heroines" which is---taking a while. I read a good book called "Shelter in Place" which is hard to describe---sort of, how different people react to the 2016 election, with 'where we live' as a metaphor. It's kind of hard to describe. I liked that the characters were my age and still dealing with all kinds of personal and professional issues.

I guess that's it? Enjoy the weekend everyone!

The splash of light color at the tip of the shawl is so very cool. Congrats on finishing it.

I'm having trouble watching "Roadkill" --- the feed keeps stopping and starting. Watched "The Last Dance" a while back --- like you say, quite interesting.

Enjoy the storms-I knit well to them! Sorry to the dogs, though!
The shawl looks lovely!

OH KIM. your shawl is so beautiful.. Love the color way. It will go with almost everything!

We love Schitt's creek on Netflix I don't want it to end. I think we are almost through it

l love stormy weather, as long as I don't have to go out into it!
The shawl matches the weather, with dark skies colors. Very pretty!
We are hooked on Ozark.