Well yesterday was a day

Yesterday was a long and tiring day. I didn't sleep well Thursday night, so it started poorly. Among my first-thing-in-the-morning chores are taking care of Jessie the cat--giving her her wet food, giving her a pill, changing her water and cleaning her litter box. She's 17, and she's on thyroid meds, and has been doing fine. Well, during my yesterday cat chores, she seemed off. She didn't get up and greet me, she hadn't eaten wet food for a day, and when I went to clean out her litter box, there was nothing to clean. She seemed weak and disoriented, and we were concerned she had a stroke.

I called three vets out here, and none of them could see her and recommended emergency vets (I think a lot of vets here are pretty basic and don't really deal with this kind of stuff). I called our Eugene vet and they said bring her in. I pulled stuff together and hit the road. We got there at 11, and in true cat style Jessie bounded out of her cat carrier and started exploring the car while we were waiting--totally normal. She ate at the vet's, and they gave her an exam and couldn't find anything wrong with her, but we decided to do bloodwork to see what's up (she last had bloodwork in September when she went on thyroid medicine). So we stopped by the Eugene house and drove back out. I feel like I sat in the car for six hours, in the rain. The good news is that the bloodwork showed that most of her values had improved since September, with the liver value a little high but not worrisome. Apparently it was just a weird blip, and she's been eating and drinking and complaining and being basically herself.

Here we are waiting for the vet. She had no interest in holding still. 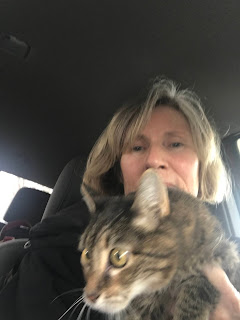 I am one clue behind with the Gnome KAL but here is the last bit. 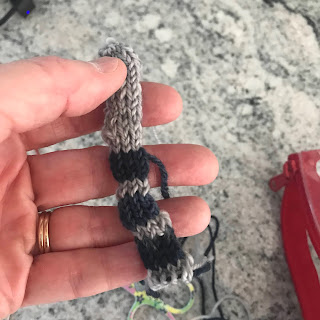 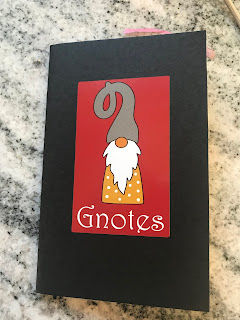 I haven't shown you this sweater for a while, but I do make a bit of progress on it now and then. 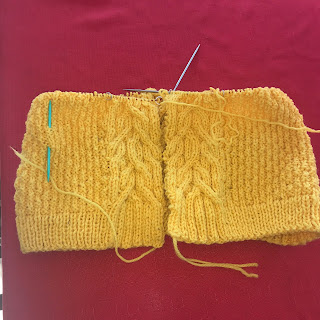 We've been watching two shows. First is "Bodyguard" which is a UK series which is very tense. Second is The Pack which has been described as Amazing Race with Dogs and yes, that is exactly what it is like. It's fun.

Quite the scare with the Jesse! I'm glad her bloodwork was ok! Too much fun, is right! The yellow sweater is spectacular! What a knit!
Go, Gnome, Go!

Briton watched "The Bodyguard," and quite enjoyed it.

Relieved thatJessie's okay --- how are you after all that?

I’m glad your Jesse is doing ok. She reminds me so much of our Barty, who lived to be 23. Looked just like your Jesse.

OH Kim. Poor Jesse. Did she pee....somewhere else? That would be my guess if one of mine was not using the box. Ugh. It is hard for them to get old. Can you encourage her to drink more water. Drip drip drip from the sink? or a lick treat? Fezzik loves the little bags of "stew" . Fireman finds it disgusting like baby food. But Fezzik Loves it and I like to keep the cats really well hydrated.
Im glad your vet would help you!
I remember when our cat became diabetic. They had us put saran over the litter to cATCH some urine. Yeah that did not work. At all. But, the new vet goes right through the belly with a tiny needle and gets some urine sterile that way.
I hope she is comfy and recovers nicely . Cats are so stoic! She looks my Rozzy. I adored my Rozzy.

Ooooo. So sorry about the kitty-blip. It's so hard to know what's up with our little pals. . . Last year (just before Covid hit), our old dog Jenny had what I thought were seizures, but was actually Dog Vertigo! (who knew?) I'm glad Jesse is feeling better now!

I'm so glad Jesse is okay. Sounds like a normal 2-legged child - they'll be looking like death, totally lethargic, running a high fever, screaming from ear pain... and the moment you finish checking in at the doctor's registration desk, they are miraculously well and ready to go out and play. Or was that just my kids??

I watched Bodyguard a while back and remember enjoying it.

Great sweater! The color is so bright and cheerful.