Tim and I went back to Eugene to start the process of getting our Eugene house ready to sell. We decided we'll go back every few weekends with a very specific task. This weekend's task was to go through all our books and to pare down immensely.

This was quite a task.

I got to Eugene early Friday and went through 'my' books. Then I took the ones I didn't want to the library for their book sale (the backup plan was to take them to Goodwill).  I filled both of the 'bins' that the library makes available for books (and the bins are probably 60 square feet each--they were both about a third full when I got there on Friday and then completely full when I left. 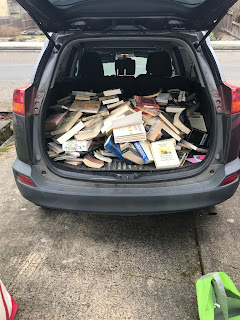 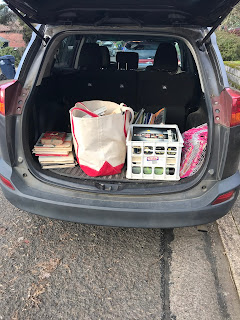 Tim got back Friday evening, and then Friday morning he went through his books and we loaded them into the car. I took them back to the library and luckily the bins had been emptied. I filled one bin and put about 20 additional ones in the second bin.

While I was doing that, Tim was getting the old textbooks ready to recycle--the library doesn't take textbooks older than 5 years and we both had texts from our undergrad days (and beyond). So we ripped the covers off and then Tim used a bandsaw to remove the rest of spines. We probably had about 40 books that needed to be taken apart. Then we loaded that all into the truck, along with four containers of garbage, and took it all to the dump.

We decided to come back to the coast Saturday night (we had finished our task, and the weather was supposed to get bad late Saturday).  We had taken two cars (and the dogs, the cat and the bird) and while I'm not a fan of night driving, it was a perfect night to drive. The dogs and cat and I listened to an episode of Smartless and then to David Sedaris' story collection and I was laughing out loud for much of the trip.

I had an old secretary desk that might be an antique--there is a railway shipping label on the back dated 1936. Anyway, I had moved it from my grandparent's house to Chicago, then Boston, then Tennessee and then to Oregon and it doesn't really fit with the coast house. It does, however, fit perfectly with my friend Ann's turn-of-the-century farmhouse.  So we loaded it up and brought it over to Ann's, and got to see these kiddos. 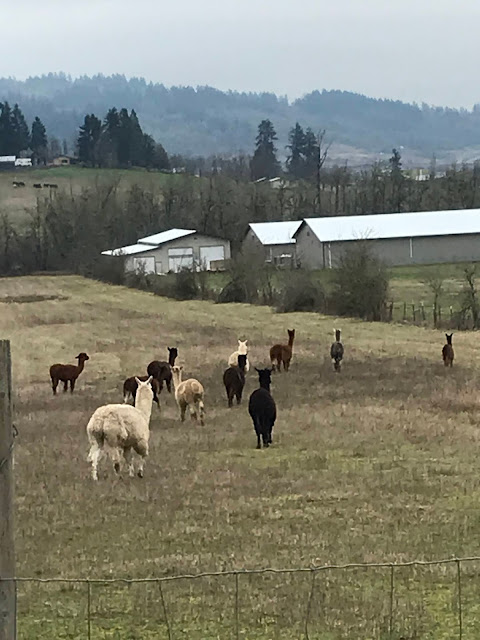 The girls had no interest in me. 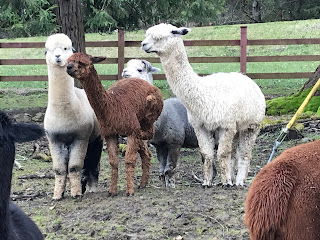 The boys were hanging around. That's Tripoli, Chaco (who is Calypso and Mana's nephew) and Calypso. 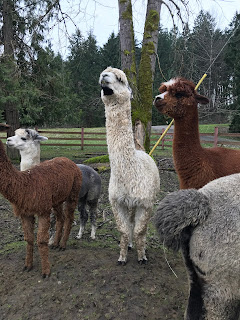 He's getting ready to spit. 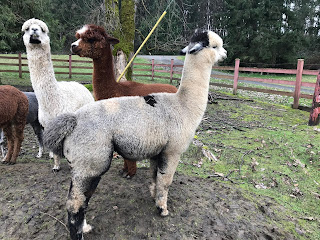 Tripoli is gorgeous, I call him Fluffernutter since he's so fluffy!

I have done nothing stitch wise but I'll be back to that now (we're watching football). More soon!

oh you got a lot done. I mean it Kim. Thats a great donation for the libraries. Im so excited that you got to see the furries!!!!! I love night driving. well, the deer make me nervous, I will say that. But a summer drive with the windows down....nothing like it.

Congratulations on getting rid of so many books! I am do the same thing -- but in slow motion. Every few weeks Keith takes a couple grocery bags to Half Price. I wish I could do in one fell swoop like you did!

Wow! That's a ton of books to donate -= so wonderful. Nice to see those fluffy critters again.

All the moving and decisions will take a lot out of you--good for you to visit the alpacas.

Every book donation site bin I've been to in Athens is stuffed full, so I just keep filling up box after box at the house.

Bomber spit?! What was his deal?