Sometimes the spirit moves you

-and today the spirit said 'make woven heart baskets out of paper' so I did.

Did you make these in Girl Scouts or at Catholic School? I didn't (I didn't go to catholic school but Tim did and he mentioned his sister made them so I put two and two together). These are a bit fiddly to make--not to cut out, the machine made that easy, but the weaving is a bit fiddly. But these are fun and will make cute Valentine's day cards (with probably another little heart or message inside. I'm way into the 'little things in a different thing' school of card making). 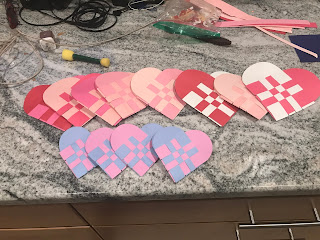 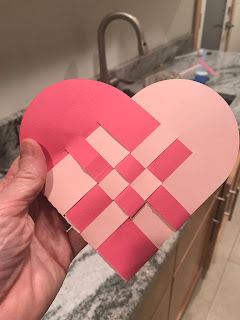 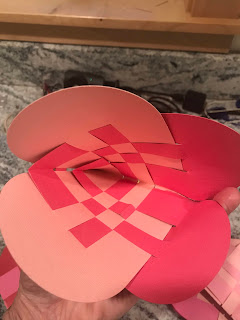 There's also some work on a sock for Tim--cool Regia yarn! 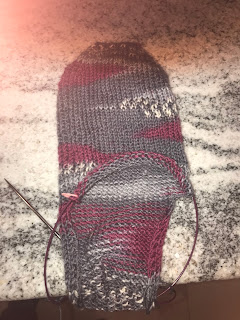 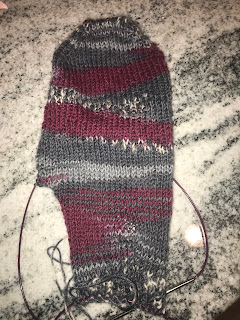 My first day of class went fine except  for some run of the mill student issues--students had plenty of time to get some things fixed, but they didn't, and now they think it becomes my problem. It doesn't.

I finished a mystery/thrilled called "The Girls Weekend" and it was pretty good. Five college friends reunite in the mansion of one of the five, and all their buried secrets come out. I liked it.

I used to make woven heart baskets with my Swedish great-grandmother when I was a little girl. (I still have some of them.) I know they're futsy to do -- but so cool! (She did most of the tricky bits, and made it seem like I was actually doing it myself. Which is an excellent grandmother maneuver.) XO

Those hearts are so pretty! And the socks look great - love that yarn. I just put in a request at my library for The Girls Weekend. Mysteries seem to be what is appealing to me these days.

I remember those hearts! My heart is full today, as we have taken back the US senate!! Thesis HUGE!
Oh Im knitting socks

I can see how the weaving would be fiddley.
I've looked at getting a Cricut for cutting fabric, but that requires getting the most expensive model. I'm holding off for now!

I used to make tons of these with the kids out of construction paper around Valentine's Day. Real fun.