I first learned to knit as a teen from my mom, but it didn't take.

I tried again in my 30s, but a little gauge issue kept me from keeping it up.

SuperBowl 2003---I wasn't interested in any of the teams playing, so I got a Lion Brand Learn to Knit Kit and picked it up again. This time it stuck!

I cast on for the "Secret Handshake" cowl by Casapinka but instead of using four different yarns I'm doing it with one skein of Zauberball Crazy.  So far it is working! 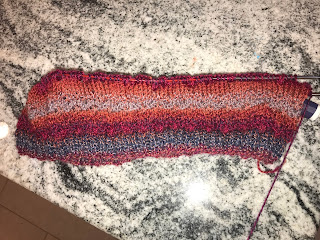 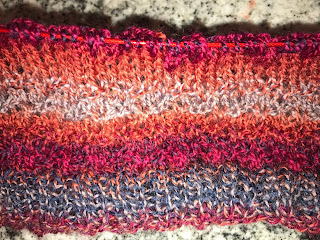 It's busy here--I gave a guest lecture in a friend's class at the U of Washington yesterday (an online master's class that meets every other weekend). It was fun but it was a chunk of time in the middle of a Saturday so that kept me from doing some other things.

I painted some rocks to hide this week (although--I'll have to figure out when. The forecast is for snow on the coast starting on Thursday, which is really rare. I'm kind of excited though!). 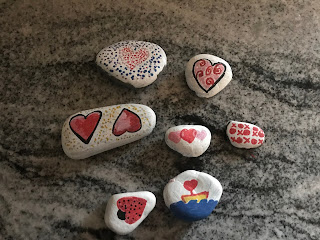 We watched "The Hummingbird Project" last night. It was right up Tim's alley--it had to do with computers and Wall Street (his former occupation) and mining (one of his majors) and had good acting. It is a little hard to follow if you don't understand about trading stocks, but still good.

Jessie Cat is once again worrying me. Around Christmas she just stopped eating, and we changed up her food so that she started eating again and gained back a lot of the weight she had lost. Now she's slowed down again--so I guess I try switching up the food again. She's 17 or 18 so this probably isn't that odd behavior---but I'd be happier if she was eating a lot. But as Tim said, it is what it is, and her last bloodwork was fine, and she's on thyroid meds, so we just do our best.

We will be 'watching' the Super Bowl--I watch the ads for work (I teach advertising and brand responsibility) and I'll be casting on for a new hat and finishing up a new TNT surprise. Tim is working on a project for the living room. He also is making a feast: sous vide spare ribs, beans, salad and fresh bread. And I'm making chocolate chip cookies right now so we'll have enough food for a week!

Happy Super Bowl Sunday and enjoy the week--stay warm those of you in the line of the most recent snowstorm!

Happy Knitaversary!!!! I hope you enjoy the Super Bowl, like usual unless the Packers are playing I won't be paying a whole lot of attention, and frankly I live about 30 minutes away from where it will be played. Stay safe.

Since I am not a football fan-I think that changing it to your Knitaversary is better! Enjoy your ad research !

Advertising and Brand Responsibility! I wonder if Al's Will took a class like that in Oregon? Im going to ask him!
Your dinner sounds relish.

Im so glad you got a kit, took to knit, and it was a fit!

Oh those rocks are fun - someone will be so happy to find one when they are out walking. And the cowl looks really nice - I like the colors. Happy Knitaversary!!

Such a fun post, Kim! And I'd love to know some of your thoughts about the Super Bowl ads. (I thought they were . . . uninspired and not terribly creative. But I'm no expert.) :-)

Pets and hugs for Jessie. And you and Tim.