One looks wonky but it isn't. 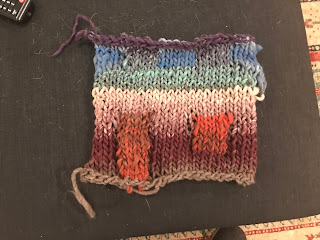 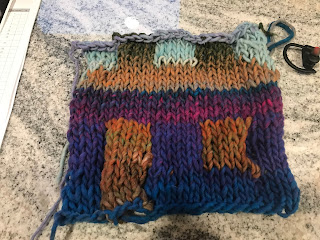 The second one is the wonky one. It just needs some straightening out.

Several people have asked how fiddly these are. Well, they're ok. They're made with bulky yarn (I'm using Kureyon Air) and there are only 25 stitches and 28 rows in each house, with four color changes. However, you only use two colors at a time so it isn't that bad.  I still don't like intarsia and I'm going to have loosen up some floats before I felt, but that's ok.

I think I now have six and I'd like eight for pillows. I also need to knit backing and a flap---so that will be 50 stitches and 56 rows which isn't really that much. I'm going to sew it all together before I felt it.

So depending on how they felt, I think this is a good project. I think the reason I can be kind of sanguine about them is because they will be felted, and any booboos should be less noticeable. Alternatively, the felting will be a shit show, and that's kind of ok too because this has been a pretty fast little project.

We had a quiet weekend, once we got back to Pacific City on Saturday. Our friend KC came by Saturday to say goodbye--she's headed back to her 'winter' home in San Diego (long story) but she and her partner Tink will be back here in June (with their adorable dogs). Sunday we hung out after walking the dogs, watching the rain storm and working on craft projects. All in all a great day.

Sounds like a good time! I am looking forward to seeing how these pillows work out! Nice work.

I love the colors in your houses, and can't wait to see how it all comes together!