Come with me to the Land of Too Many Hobbies

It is a pleasant land,  although the closets are getting a little crowded. But I've been playing around with some stuff today that I wanted to share.

I love beach glass. Have you heard of the San Juan Islands? On one of the islands, Orcas Island, some  peoples' driveways have sea glass instead of gravel. It is really enchanting. I was hoping when we moved to the coast that there would be plenty of sea glass to collect--I was thinking we could maybe even replace some graveled areas surrounding our house with the sea glass we collected.

Long story short--this apparently is not a good beach glass area. I have a jar where I've been collecting it, and after all this time I have maybe eight pieces. I was hoping to do some seaglass necklaces, but I haven't had a lot of success finding the right size piece--two are big chunks of beer bottles, so they're kind of brown and clunky, and not what I was envisioning.

To the rescue, of course, comes Amazon--and I bought a little bag of sea glass and some wire. And here are my first attempts:* 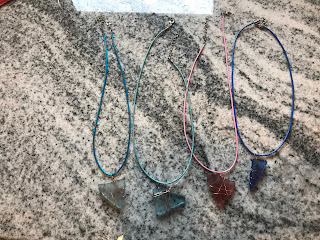 I had the cords in the craft closet. I'm not sure how many beach glass necklaces I need but I really like these. 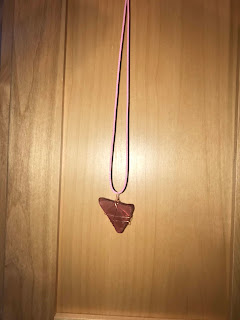 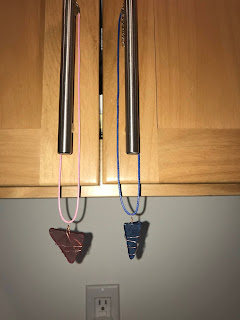 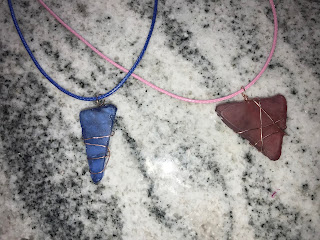 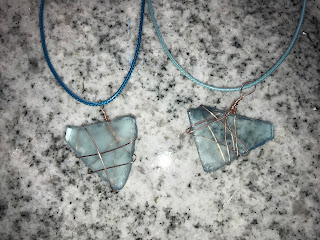 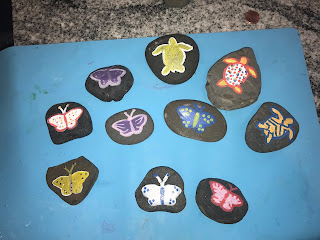 And a few more beach rocks, hopefully to be hidden this week if it stops raining. I hope your weekend is great!

*First attempts, but not including the ten I did that looked too sloppy.

Great work on the sea glass necklaces! I love to hunt for sea glass! The beach rocks are really fun-nice work!

Very pretty! My friend makes necklaces like that and sells them on Etsy!

Oh, I know the Land of Too Many Crafts quite intimately . . . I love your necklaces. They turned out splendidly! (And I would love a beach glass path in my garden. . . )

Sea glass is magical. I love your wire-wrapping.
I have never found any sea glass that wasn't brown. But I keep looking!

I think you did an amazing job with the glass wire wrapping. Beautiful! Any thing to De stress during this time of covid .