We are on the coast this weekend, and the big project was to set up the craft wall on the office wall. A few weeks ago we brought out a big desk from Eugene to the coast and then we decided to bring out the existing 'yarn wall' from Eugene and add on to it (to make it more of a craft wall). We don't have a ton of closet space here--by design--and I have gotten rid of a ton of yarn in preparation to sell the house in Eugene. I've moved out almost all the yarn that I want to keep, and it is now all housed in the craft wall: 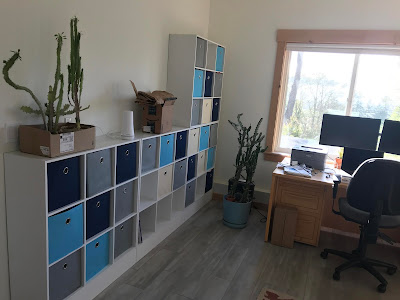 Each of the little cubbies are about one cubic foot.

Not all of these are filled with yarn--I would guess right now it is about two thirds filled with yarn, embroidery things are in a few, and there's space for fleece and roving (and a few more bits of yarn in Eugene). The craft wall has opened up space in my 'official' craft room, and also in our "Harry Potter Closet" which is where a bunch of crafts have lived. So this is all good. The cubbies are all from Target, and Tim created a little 'stand' for them all (due to some plumbing stuff on the wall, long story, but if we want to we can make a two-room apartment downstairs, with the kitchen going where the craft wall is). Anyway, I'm thrilled with this.

I also cast on for Float and so far, I find it enchanting. 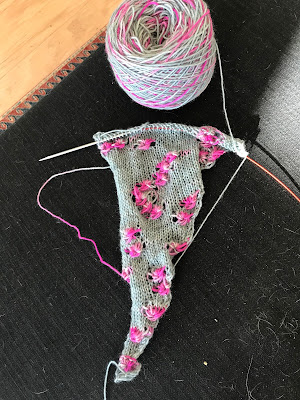 I also cast on for a Casapinka cowl called Painterly--it's half linen stitch. I was hanging out in the office while Tim was finishing it up and found some yarn I liked so just went for it. It is extremely early days on this one. 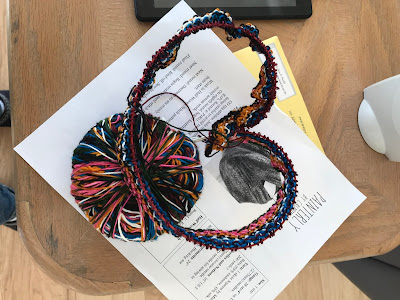 It's been a nice calm weekend which we like.

Cute new projects (that Float pattern is very interesting) and I LOVE your craft wall. So nice and organized (appeals to the Virgo in me).

The craft wall is AWESOME, Kim. It looks great -- and it's nicely organized, too. I love that Float pattern. I'm excited to watch it progress. :-)

I love the clean, organized look of your craft wall!!!! The new projects look very enjoyable!